According to one study of 48 women who had autologous fat injections for breast enhancement between 1999 and 2009, eight of the women’s mammograms showed “clustered micro calcification”. Micro calcifications can be regarded as highly suspicious for breast cancer. Biopsies showed no presence of cancer but the necroses of the fat cells are indistinguishable from abnormalities associated with breast cancer.

The new generation of mammography, in particular digital mammography seems to be better in distinguishing cancer cells from benign ones in dense breast tissue. The method for harvesting and injection has improved greatly over the years, which may increase the survival rate of fat cells, but equally important is the skill and experience of the surgeon. But a debate continues on how long these fat cells will last. Frequently they do not survive and may be absorbed by the body or become liquid and form a cyst that can mimic or obscure breast cancer.

To have breast enlargement by fat transfer takes several sessions making for an expensive treatment and usually will only increase breast size by up to one cup. Recovery is longer than with traditional breast augmentation with saline or silicone implants. The final result will not be evident for about six months, whereas with implants about six weeks.

At this time fat grafting is an accepted procedure for facial and hand rejuvenation, and corrective breast surgery for breast defects or reconstruction. The societies (ASAPS and ASPS) do not recommend fat injections for breast augmentation until there is more clinical evidence that documents safety and efficacy. 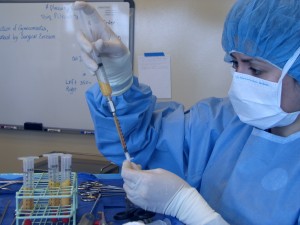 previous post Arm Liposuction versus Arm Lift
next post What is the Rice Test and What is it For?
Back to top
mobile desktop